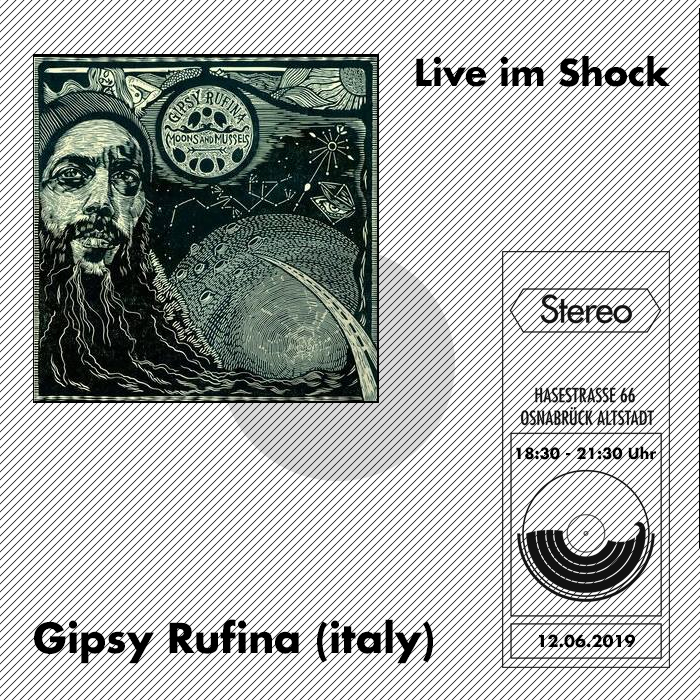 INFO:
Born and raised in between the Appennini mountains in the center of Italy , Gipsy Rufina desired to see what was beyond the mountains.
Over the mountains was Rome, where Gipsy played in different bands in the 90s Punk-HardCore scene like Redemption and The Bloodmakers.
Soon Rome became too small.
And he wanted to see what was over the ocean.Once over ocean it made sense to cross the US on the Greyhound for months and start to write songs in Chicago strumming an acoustic guitar, which he bought for ten bucks. In 2004,ending up in Koeln,Germany he started playing gigs opening for his friends,local heroes, the Cowboys On Dope. While still working on the ships, going back and forth from Brasil or from Thaiti stoned with Pakalolo, British Virgin Islands filled with pure cane juice..Then in 2004/2005, Gipsy recorded his first 4 songs demo of acoustic ballads with a four tracks Tascam cassette recorder, ‘Gipsy’s Broke’ and started travelling with his music.
In 2007 Gipsy puts out „Name your Beast „, 6 songs mini Lp.Gipsy Rufina then would became a full time touring musician.
Different records and split records were made in the following years.
In the last years Gipsy Rufina did tour no stop in:
Portugal,Spain,Basque Country,France,Switzerland,Austria,Slovenia,Italy,Germany,England,Scotland,Holland, Belgium,Danemark,Poland,Czech Republic,Latvia,Estonia,Finland,Ukraine,Lappland, Macedonia, Albania,Kosovo, Belarus, Brasil, Uruguai,Argentina.